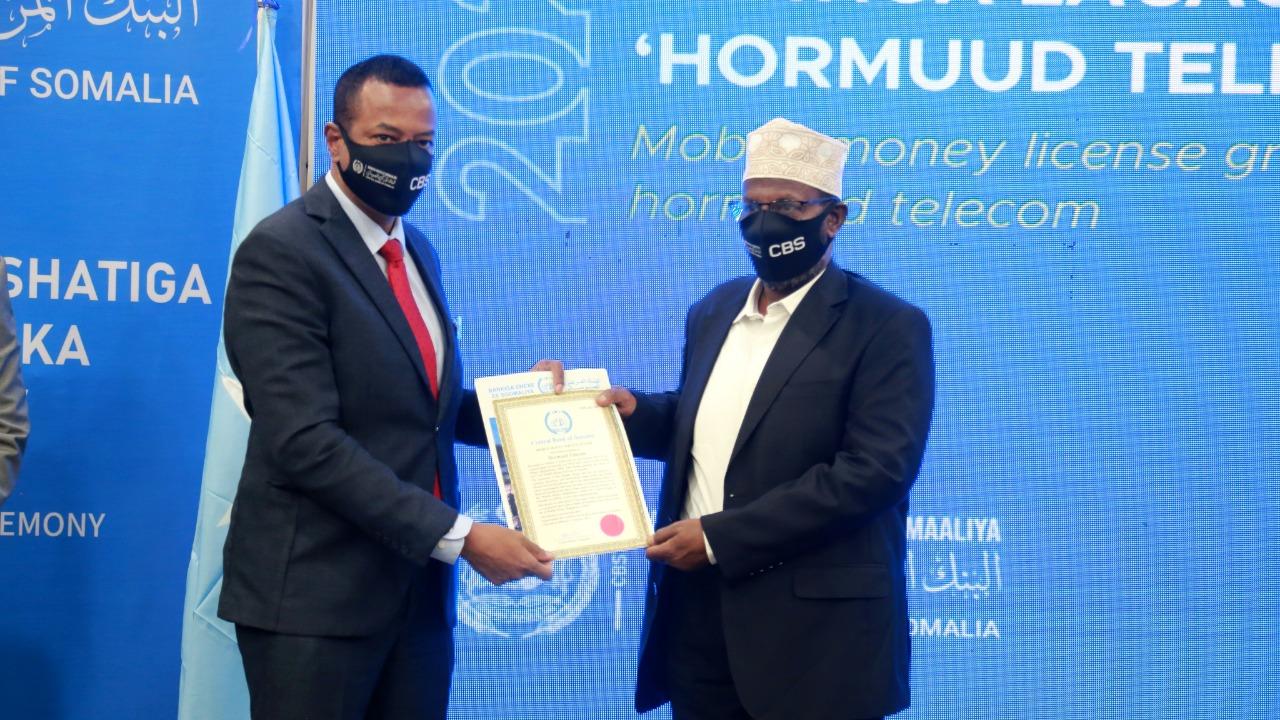 EVCPlus has a subscriber base of over 3.6 million and is currently used by about 3 million.

Mobile money services have been in operation in Somalia for about 10 years now and make up the bulk of transactions for buying, selling, and transfers compared to Somali bank notes.

Speaking about this milestone, the Governor of the Central Bank of Somalia, Abdirahman Mohamed Abdullahi, said:

“We have developed a robust regulation, and based on that, we have issued the first license of its kind in the country today.

This has huge significance. I cannot express in words how important this is.”

On 27th February, 2021– the Central Bank of Somalia issued today Mobile Money license to Hormuud Telecom under the provision of mobile money service within the Federal Republic of Somalia. pic.twitter.com/UUJ4C7yXhb

Mohamud Yusuf, the CEO of Hormuud Telecom, the Somalia telecommunications firm based out of Mogadishu, expressed his optimism on this key milestone saying:

“The news today cements what we’ve known for a long time – that Somalia is moving towards being the world’s first truly cashless economy.

This issuing of a mobile money license for the first time is arguably one of the most important steps taken by Somalia since the end of the war.”

Mobile money service is the preferred choice of Somalis due to the low barrier to entry. To use mobile money in Somalia, you simply purchase a mobile phone, SIM card, and register yourself. From there, you can start depositing and making payments from as low as one dollar to whatever amount you want.

The appeal of mobile money has largely been driven by the Somali Shilling devaluation over the decades resulting in preference of the dollar.

Today, one U.S. dollar is worth 25, 000 Somali Shillings – the value of one kilogram of rice in Somali.

According to a recent World Bank Report, Somalia has one of the most active mobile money markets in the world, outpacing most other countries in Africa.

Approximately 155 million transactions. worth $2.7 billion, are recorded per month.

According to a Hormuud Telecom analysis report, the cash-out rates on mobile money platforms in Somalia are less than 5%, which signifies an increased tendency to keep money in mobile wallets rather than cash it out. Somali telecommunications companies have designed and built a platform that people instinctively trust, and this is clear to see in the daily digital purchase of goods on the bustling streets of Mogadishu.

A recent survey also showed that Somalia is now the cheapest country in Africa when it comes to Internet data charges largely driven by about 11 players contributing to competitive data rates offerings.

The new regulation now formalizes digital transactions as the primary payment method in Somalia and this is expected to enable further integration of the Somali financial system with the international market.

Open a Binance Bitcoin Trading Account to get started!

How To Get Rid Of Onion Odor

Onions are plentiful in fiber, potassium, nutrient B, and nutrient C which are generally...

The individual who edits photo for bad purpose has been...

Application Deadline:15 February 2021. The Ministry of Foreign Affairs is pleased...

WFP responds as attack on Palma displaces thousands in...

51 rockets and missiles uncovered near a town in Tigray...

The fourth mechanized division of the Ethiopian Defense Forces has uncovered 51...

Unique Families From Around The World

Western Society seems to have this idea that there is only one kind of family, that...

TPLF's unexpected measure on its leaders

During the conversation, a nitty gritty preparation was made by Dr. Getachew Assefa...

Germany is reportedly to open a formal investigation into suspicions Russia was...